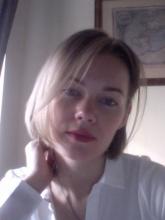 M.A. in American Studies, University of Massachusetts in Boston 2011

“Compiling History for Masses: The Fall of the Romanov Dynasty.” One Hundred Years of Soviet Cinema, ed. Daniel Fairfax. The LedaTape    Organization, July 2019

“From Editor to Director: Esfir Shub’s Compilation Trilogy Through the Lens of Its Contemporary Reception” at SSEES, University College London, December 2020

Anastasia Kostina is a Ph.D. candidate in the joint program of Film and Media Studies and Slavic Languages and Literatures. In 2011 she received M.A. in American Studies from the University of Massachusetts in Boston where she was on a Fulbright scholarship. While in the program she gained interest in the study of documentary film. Upon receiving her Master’s Anastasia returned to Moscow to work as a documentary film editor for RT, a state-sponsored Russian news TV-channel. In 2014 the interest in documentary led Anastasia to Yale PhD program, her dissertation research explores the films and career of Soviet documentary and filmmaker Esfir Shub.

In 2019/2020 academic year Anastasia started a visiting research program at University College London which was later extended by one year due to the pandemic.