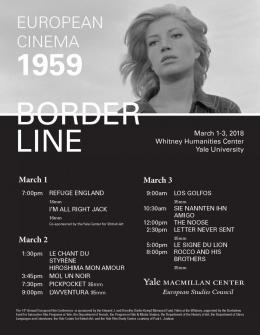 Each year since 2003 the Film Studies cohort of five faculty has been funded by Yale’s European Studies Council to showcase a different year in Europe via an international sample of its cinematic production.  12-18 feature films, many drawn from distant archives, are shown in 35mm format, sometimes preceded by newsreels or shorts, and always interspersed with panels that discuss the films in relation to the historical, social, and aesthetic concerns of the year in focus.  The panels are comprised equally of graduate students and faculty, occasionally leavened with guests invited from beyond Yale.  A graduate student curates the event, locating prints, arranging logistics (soft subtitles when necessary), and preparing a sheaf of notes and the poster. The years that have received attention thus far are: