This series, organized under the auspices of the Russian Studies Project at the MacMillan Center, offers audiences at Yale and from the wider community a look at some of the best of Russian fiction and non-fiction film over the course of both the spring and fall semesters. Curated and presented by specialists in the field, the series focuses on post-Soviet cinema, and incorporates important films made about Russia by filmmakers from other countries. We strive to present the finest films by both major, established auteurs (such as Aleksei Balabanov, Aleksei German and Aleksandr Sokurov) and up-and-coming artists, and occasionally dive into the riches of the Soviet and pre-Soviet cinematic past as well. All screenings are followed by discussion sessions in which audience members are warmly invited to participate. In the spring of 2016, we will present a unique series of remarkable films, largely unscreened in the United States except at film festivals, by contemporary directors. The series is supported by the European Studies Council at the MacMillan Center for International and Area Studies, and all screenings are free and open to the public. 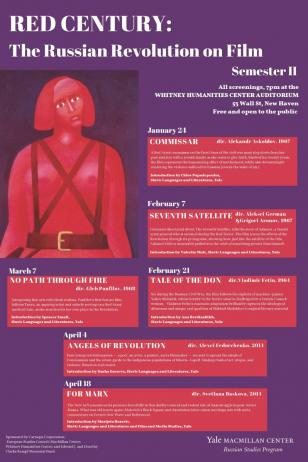 Fall 2016: Body and Soul: The Films of Aleksandr Sokurov

Fall 2015: Crime and Transcendence: The Films of Aleksei Balabanov