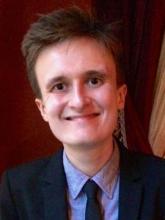 At Yale, I have taught or hope to teach courses on modernism, literary and critical theory, and contemporary cinema. I am also a co-organizer of Utopia after Utopia, a research initiative on contemporary post-socialist critical theory and art practice. My first book, Flat Protagonists: A Theory of Novel Character (Oxford UP, forthcoming fall 2016), discusses an odd group of characters–found across the long history of the French and British novel–that simplify in the course of a narrative, instead of deepening and expanding. My second book, entitled Spaces of Feeling: Affect and Awareness in Modernist Literature (Cornell UP, 2017) studies representations of intersubjective affective awareness and unawareness in early- to mid-twentieth-century American, British, and French fiction and poetry. In addition to my academic work, I write literary and cultural criticism for publications such as n+1, Jacobin, The Los Angeles Review of Books, Post45 (Contemporaries), MAKE Literary Magazine, and Boston Review. I am a member of the Harvard Society of Fellows, which I joined as a Junior Fellow in 2013.

- “The Novel and Character,” The Cambridge Companion to the Novel, ed. Eric Bulson (New York, NY: Cambridge UP, 2016), forthcoming.