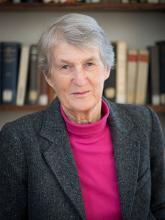 Katerina Clark’s primary film expertize is in Russian film of the 1920s, the 1930s and the post-Stalin and post-Soviet decades, though she also writes on European and Asian film of the 1920s and 1930s.  For five years she was a member of the core faculty for the Working Group on Contemporary Russian Culture which comprised scholars from the United States, Great Britain and Russia and met annually in one of these countries to analyze recent trends in Russian film and literature.  She has also served as president of the Association for Slavic, East European and Eurasian Studies.  At Yale she has been the convener of a committee that for the past fifteen years has organized an annual conference on European film.  For each of these conferences a particular year was chosen and films were screened from a cross-section of national cinemas that were released around that time with panels to discuss them.  At present she serves as the Director of Undergraduate Studies in Film and Media Studies.

Moscow, the Fourth Rome: Stalinism, Cosmopolitanism and the Evolution of Soviet Culture, 1931-1941

Moscow, the Fourth Rome breaches the intellectual iron curtain that has circumscribed cultural histories of Stalinist Russia, by broadening the framework to include considerable interaction with Western intellectuals and trends.  In so doing it provides a new polemical and political context for understanding canonical works of writers such as Brecht, Benjamin, Lukacs, and Bakhtin.