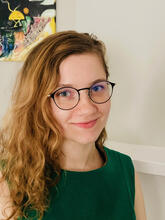 Anna Tropnikova is a PhD student in Slavic Languages and Literatures and Film and Media Studies. Her research is primarily focused on technology-influenced post-Soviet derivatives of Russian and Eastern European non-conformism – working in the negative spaces of media’s national narratives, she investigates issues of historiography, censorship and ideological neglect. Before Yale, she worked in programming and photography in Silicon Valley. Anna holds two bachelor’s degrees from University of Chicago, in Russian and Eastern European Studies and Visual Art. She was the recipient of the George V. Bobrinskoy Award for Excellence in Slavic Languages and Literatures in 2016, and of the National Post-Secondary Russian Essay Contest’s Silver Medal in 2013. She has also won numerous honors and awards for her artwork, including a grant from the University’s Festival of the Arts in 2015 and an Honorary Mention in Utah’s Best of State Art Show in 2012. While living in Utah, she received a scholarship from the National Society of the Sons of Utah Pioneers, and while living in Russia, she received a presidential stipend, both for her academic work.