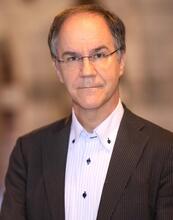 Aaron Gerow is Professor in East Asian film and media, with a joint appointment between Film and Media Studies and East Asian Languages and Literatures. He teaches undergraduate courses in Japanese and East Asian film, Japanese literature, world animation, film genre, and Japanese popular culture; and graduate courses in Japanese film theory, historiography, television, and cultural and media theory. He has published widely on a variety of topics in East Asian cinema and popular culture. His publications include Visions of Japanese Modernity: Articulations of Cinema, Nation, and Spectatorship, 1895-1925 (University of California Press), A Page of Madness: Cinema and Modernity in 1920s Japan (Center for Japanese Studies at the University of Michigan), and Kitano Takeshi (British Film Institute). He also co-authored the Research Guide to Japanese Film Studies with Abe Mark Nornes (Center for Japanese Studies), which came out in Japanese translation in 2016. Before coming to Yale in 2004, he spent nearly 12 years in Japan, where he was an associate professor at Yokohama National University, in addition to teaching at Meiji Gakuin University and working for a time as a coordinator at the Yamagata International Documentary Film Festival. He is currently writing about the history of Japanese film theory and about Japanese cinema of the 1990s.

Visions of Japanese Modernity: Articulations of Cinema, Nation and Spectatorship, 1895-1925.

Japan has done marvelous things with cinema, giving the world the likes of Kurosawa, Mizoguchi, and Ozu. But cinema did not arrive in Japan fully formed at the end of the nineteenth century, nor was it simply adopted into an ages-old culture. Aaron Gerow explores the processes by which film was defined, transformed, and adapted during its first three decades in Japan. He focuses in particular on how one trend in criticism, the Pure Film Movement, changed not only the way films were made, but also how they were conceived.