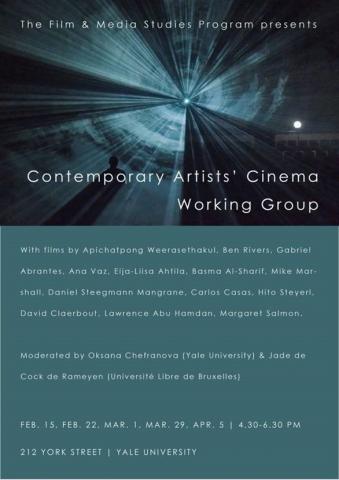 We are delighted to invite you to join our second session of our working group on the contemporary explosion of artists’ cinema. This week we will watch and discuss films by Eija-Liisa Ahtila, Basma Al-Sharif & Ana Vaz – whose work interrogate the narrative from an ecological, political and postcolonial perspective.

Since the mid-90’s, artists have made claims upon cinema within the institutional context of the visual arts. Artists’ cinema is characterized simultaneously by the re-appropriation of cinematic tropes (narrative, projection, spectacle) and by a renewed concern for authenticity, in particular through the endorsement of the limited editions sale model and a restricted access economy. (Connolly 2009; Balsom 2014, 2017) Cinema continues to live by expanding beyond its habitual territories, and this relocation of cinema (Casetti 2015) requires a relocation of theoretical approaches. At the crossroad of the economies and aesthetics of the image, the line between cinema and gallery become blurred, as well as between the disciplines of film & media studies and history of art. Presented in various institutional contexts, from art museums to commercial galleries and film festivals, the artists who will be considered all have in common a formal engagement with cinema, and an adoption of the art market’s reassertion of rarity. By providing an overview of the current status of the field, we aim to inquire into a cinema that is fluid, continuously othered, and often of extremely restricted access – positing a challenge for both scholars and curators.

All are welcome to attend (with or without having read the readings)! Please write to jade.decockderameyen@yale.edu to be added to the mailing list