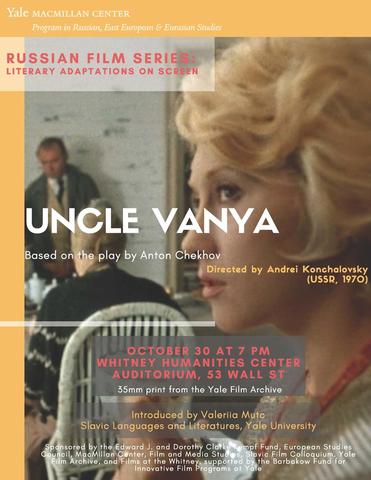 “Adapted and directed by Andrei Mikhalkov-Konchalovsky, this “Uncle Vanya” is an exceedingly graceful, beautifully acted production that manages to respect Chekhov as a man of his own time, as well as what I would assume to be the Soviet view of Chekhov as Russia’s saddest, gentlest, funniest and most compassionate revolutionary playwright.” - for the full review: https://www.nytimes.com/1972/05/19/archives/the-screen-a-graceful-uncle-…
1970 | 1 hr 44 mins
Directed by Andrey Konchalovskiy
free and open to the public
Sponsors:
Edward J. and Dorothy Clarke Kempf Memorial Fund, Russian, East European and Eurasian Studies Program, European Studies Council at the MacMillan Center, Film and Media Studies Program, Slavic Film Colloquium, the Yale Film Archive, and Films at the Whitney, supported by the Barbakow Fund for Innovative Film Programs at Yale