Sarah Jeong: Gamergate and the New Paradigm of Media 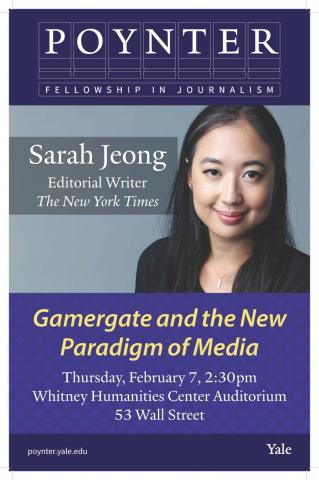 Sarah Jeong: Gamergate and the New Paradigm of Media

Sarah Jeong is a journalist and lawyer. She is currently a writer for the New York Times Editorial Board. She is the author of The Internet of Garbage, and has bylines at the Verge, the Atlantic, the Washington Post, New York Times Magazine, Motherboard, Forbes, the Guardian, and more. In 2017, she was named as one of Forbes’s 30 under 30 in the category of Media.

Jeong graduated from Harvard Law School in 2014. As a law student, she edited the Harvard Journal of Law & Gender, and worked at the Electronic Frontier Foundation and at the Berkman Center for Internet & Society. She was a Poynter Fellow in Journalism at Yale for 2016, and also currently a fellow at the Internet Law & Policy Foundry.