Lecture. Ute Holl (University of Basel). Radios and Environments: from Hörspiel to Radio-ArtJan. 29, 2019 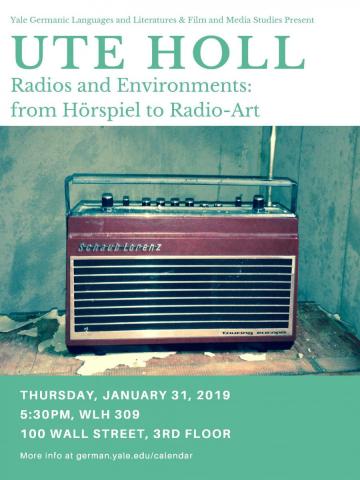 For many composers or sound artists radio had, from its beginnings, been an experience of a «universal and cosmic stage», as Futurists Marinetti and Masnata put it in their manifesto «La Radia» of 1933. Working under the influence of radio techniques was to work towards an «immensification of space» that transcended the framed space of theater and cinema. Rather than considering the radio as institution and technique — as Bertolt Brecht did — the tradition of sound art on radio sets out from modulated and transmitted sounds on electromagnetic waves and fields, composing according to acoustic effects and in terms of construing spaces. Rather than devising the art of radioplay according to semantic impacts, disturbances of transmission were considered as important elements of sounds. Compositions for the radio follow the impacts of technically transformed sounds, noises and voices, raising the issue of environment as an effect of media aesthetics. My paper will analyze examples of historical and contemporary sound art and Hörspiel to explore the interrelation of radio and radiophonic environments. Presenting examples from European, mostly German radio productions, will discuss radiophonic strategies of shifting boundaries between, for instance, the human and the beast, men and machines, fiction and documentary.