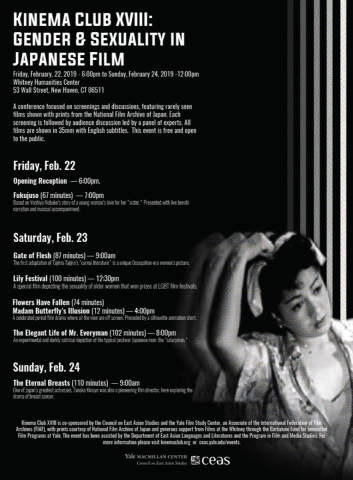 Kinema Club XVIII, with the support of the Council on East Asian Studies, will take place at Yale University February 22-24, 2019. The Kinema Club conferences on Japanese film and media have distinguished themselves over the years for their variety and inventiveness, ranging from workshops to full-fledged conferences, from themed symposia to sidebars of film festivals. This edition will be a new step even for Kinema Club, in that it will center on screening and discussing rare films, not on delivering papers.

The format, inspired by the conferences held by the European Studies Council at Yale, centers on the screening of 35mm prints of rarely seen films over a three-day period. After each film or set of films, a panel of 3-4 members will begin discussion not by reading prepared papers, but by each member offering comments strictly limited to 5-10 minutes. This leaves the majority of the time open for discussion among all the participants.

To help focus the discussion, the Yale organizing committee has decided the theme of KC XVIII will be “Gender and Sexuality in Japanese Cinema.” Japanese cinema has long been explored through its treatment of gender and sexuality, from the modern women of Mizoguchi to the masculine fantasies of yakuza films, from the obscured eroticism of roman porno to the beautiful fighting girls of anime. In selecting this theme, the organizing committee wishes to invite new perspectives on the visual construction of gender and sexuality in Japanese media by screening films rarely seen which scholars can position to intervene in ongoing conversations about gender and sexuality.

Kinema Club XVIII is co-sponsored by the Council on East Asian Studies and the Yale Film Study Center, an Associate of the International Federation of Film Archives (FIAF), with prints courtesy of National Film Archive of Japan and generous support from Films at the Whitney through the Barbakow Fund for Innovative Film Programs at Yale. The event has been assisted by the Department of East Asian Languages and Literatures and the Program in Film and Media Studies.All screenings and panel discussions are free and open to the public.