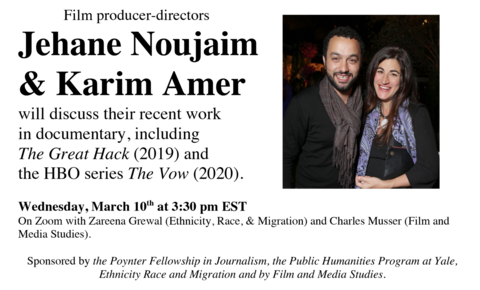 Pre-registration is required for this event. You will receive an email confirmation with the virtual event details after registering.

ehane Noujaim is a verité-style documentary filmmaker who brings intimacy and empathy to whatever topic she pursues. Beginning with her early films, Rafea: Solar Mama (2013), Control Room (2004) and Startup.com (2001), Noujaim’s work is social and political, tackling large issues through the individuals experiencing them. Her film The Square (2013) provided a ground-level view of the Egyptian Revolution and garnered an Oscar nomination, three Emmy wins, and the Audience Award at the Sundance Film Festival. Noujaim, along with producer-director Karim Amer explored the Cambridge Analytica hack in The Great Hack (2019), which was hailed by The Guardian as “the most important doc [of the] year” and made the Academy Award and Grierson shortlists. She and Amer are currently producing and directing the HBO series The Vow, which follows members who joined the self-improvement group NXIVM ––whose leader, Keith Raniere, was convicted of sex trafficking and racketeering conspiracy, among other crimes – and reveals the emotional toll of unfolding events.

Co -Sponsored by Public Humanities Program at Yale, Ethnicity Race and Migration and by Film and Media Studies.