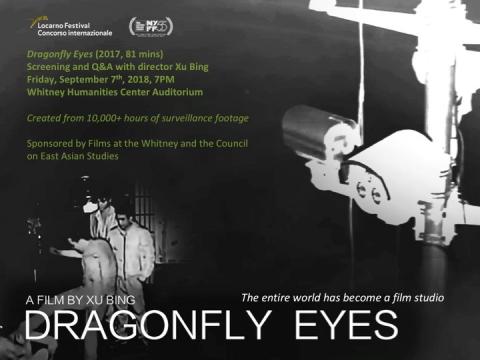 Each of us is captured on surveillance cameras, on average, 300 times a day. These all-seeing “eyes” observe Qing Ting too, a young woman, as she leaves the Buddhist temple where she has been training to become a nun. She returns to the secular world, where she takes a job in a highly mechanized dairy farm. There, Ke Fan, a technician, falls in love with her, breaks the law in an attempt to please her and is sent to jail. On his release, he can’t find Qing Ting and looks for her desperately until he figures out that she has reinvented herself as the online celebrity Xiao Xiao. Ke Fan decides to revamp himself.

In 1999, Xu Bing was awarded a MacArthur Fellowship in recognition of his “capacity to contribute importantly to society, particularly in printmaking and calligraphy.” In 2003, he was conferred the 14th Fukuoka Asian Culture Award for his “contribution to the development of Asian culture”. In 2004, he won the first Artes Mundi Prize in Wales. In 2006, the Southern Graphics Council conferred on Xu Bing its lifetime achievement award in recognition of the fact that his “use of text, language and books has impacted the dialogue of the print and art worlds in significant ways.” In 2015, he was awarded the 2014 Department of State-Medal of Arts for his efforts to promote cultural understanding through his artworks.