Crisis in Syria: A look into the female experience of war Film Screening of For Sama 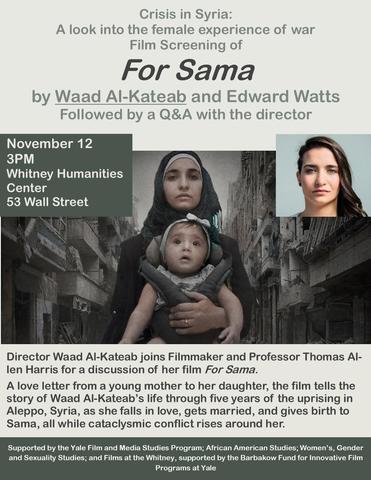 A look into the female experience of war

by Waad Al-Kateab and Edward Watts

Followed by a Q&A with the director

Director Waad Al-Kateab joins Filmmaker and Professor Thomas Allen Harris for a discussion of her film For Sama.

A love letter from a young mother to her daughter, the film tells the story of Waad Al-Kateab’s life through five years of the uprising in Aleppo, Syria, as she falls in love, gets married, and gives birth to  Sama, all while cataclysmic conflict rises around her.

Supported by the Yale Film and Media Studies Program; African American Studies; Women’s, Gender and Sexuality Studies; and Films at the Whitney, supported by the Barbakow Fund for Innovative Film Programs at Yale