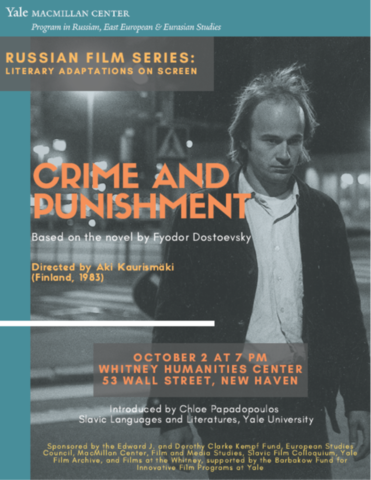 “Kaurismäki launched his career with this terse, elliptical, and gripping updating of the Dostoevsky novel to contemporary Helsinki, set to the music of German composer Paul Hindemith. While Kaurismäki remains semi-faithful to the novel, he makes some notable changes to the scenario: the film’s Raskolnikov, an ex–law student who works in a slaughterhouse, sets out to rob and murder a businessman who killed his fiancée in a drunken hit-and-run, rather than an old moneylender whose death he justifies by virtue of his Nietzschean “superiority.” Ultimately, the world of the film is less that of Dostoevsky than that of the nihilistic late films of Robert Bresson (who had himself refashioned Crime and Punishment as Pickpocket): one hears echoes of Le Diable probablement and L’Argent in Kaurismäki’s statement that his debut is, “first and foremost, a film about the final desperate rebellion of a young man against society. The society that — as we know — is a merciless machine.” Description by the Toronto International Film Festival
Print courtesy of the Suomen Elokuvasäätiö/The Finnish Film Foundation
1h 33min | 1983