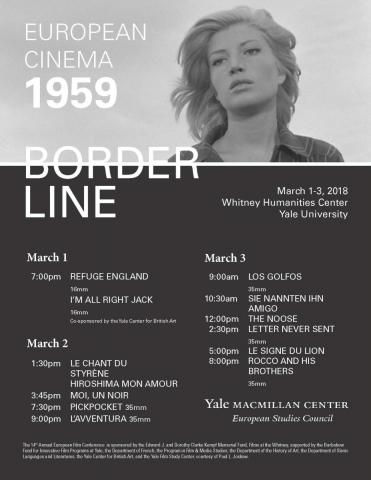 The 14th annual European Film Conference at Yale is sponsored by the European Studies Council at Yale, Edward J. and Dorothy Clarke Kempf Memorial Fund, Films at the Whitney, supported by the Barbakow Fund for Innovative Film Programs at Yale, the Departments of French, Slavic Languages and Literatures, German, History of Art, the Program in Film & Media Studies, the Yale Center for British Art, and the Yale Film Study Center, courtesy of Paul L. Joskow.

All screenings are free and open to the public.

All foreign-language films will be screened with English subtitles.

Print from the British Film Institute

Print from the Yale Film Archive

This reception is co-sponsored by Films at the Whitney

Print from the Harvard Film Archive

Print from the Harvard Film Archive

Print courtesy of Gosfilmofond of Russia

ROCCO E I SUOI FRATELLI [Rocco and His Brothers]