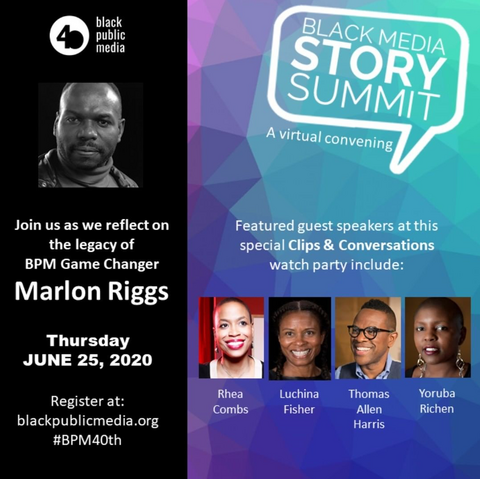 Between 1987 and 1995, public television released four independent documentaries by filmmaker Marlon Riggs: Tongues Untied, Black Is … Black Ain’t , Color Adjustment, and Ethnic Notions. These films brought a fresh voice to public media and paved the way for a new generation of African American and LGBTQ+ filmmakers to share their stories. During this conversation, we not only look back at his work, but examine how Riggs’ influence continues to inspire emerging media makers. Join us for a conversation about his impact on public media and the field.

Luchina is an award-winning writer and filmmaker. She has written and produced three nationally broadcast documentaries on Gladys Knight, B.B. King and the history of Title IX, as well as numerous segments for television. Her work has appeared on Discovery Health, A&E, ESPN, National Geographic Channel, ABC and in syndication. She has also written, directed and produced two award-winning short films.

Luchina began her career as a journalist, reporting for the Miami Herald and People magazine. Her award-winning articles have appeared in leading print and online media, and she has co-authored and ghostwritten several books. Her upcoming documentary, Mama Gloria, focuses on the life and career of septuagenarian transgender woman Gloria Allen.

Cornelius is co-director of California Newsreel, the 52-year-old social issue film distribution and production company where he has been on staff since 1981.  Over the years, he has directed its anti-apartheid project, the Southern Africa Media Center, and founded the Library of African Cinema (the organization’s African film distribution initiative).  Currently, Cornelius heads California Newsreel’s African American Perspectives collection, which is focused on films on African American life and history.

Cornelius has served on funding panels and as a judge for film festivals in the US and internationally. He is also an independent film curator — most regularly for the Museum of the African Diaspora — specializing in films from the Black world.