The City and the Country: On the Temporal Fissures of the Iranian New Wave Cinema 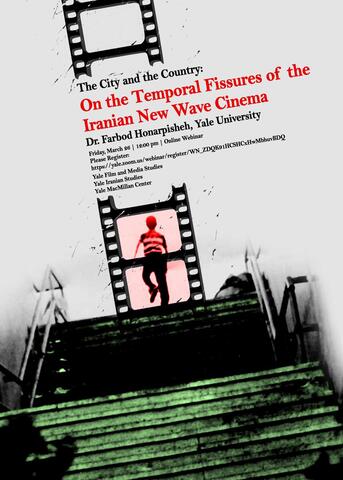 The City and the Country: On the Temporal Fissures of

Fleeting visions of a melting world, loud cities and streets, knives cutting across bodies, across cinema screens, villages in ruin, neighborhoods of the everyday, images of a plagued presence, a haunting past. Maintaining a focus on the body of cinematic work that has come to be known as the Iranian New Wave Cinema of the 60s and 70s, this study first draws a trajectory of the analyses that saw the existence of the perception of two or multiple temporalities—brought about by the conditions of uneven development—as a precondition for modernism. Exemplary films, literary texts and political treatises from the era are juxtaposed to each other and analyzed in detail. In time, this expansion of the idea of modernism of uneven development, emerges as an opening to theoretically reframe the Iranian modernist visual and literary scenes in the decades following WWII.

Farbod Honarpisheh is presently the E. Yarshater Postdoctoral Associate at Yale University. His dissertation, “Fragmented Allegories of National Authenticity: Art and Politics of the Iranian New Wave Cinema of the 1960s and 1970s,” was completed at Columbia University. He also completed at Columbia an MA degree with a thesis called “In the Labyrinth of Yeşilçam: Transient Cosmopolitanism, Passing Images of a Street, and a Theater in Istanbul.” He is a recipient of many awards, among them, multiple awards from Columbia University, the SSHRC Doctoral Dissertation Award, and the K. Dietrich School Humanities Center Fellowship in Film and Media Studies at the University of Pittsburgh. His academic publications include: “The Oriental ‘Other’ in Soviet Cinema, 1929–34”; “You Are on Indian Land: Between Borders, Styles, and Authors”; and “Koşucu’nun Tasviri: Devrim Sonrası İran Sinemasının Önemli Bır Filmine Gösterilen Tepkiler Üstüne Bir Çalişma” (“Representing The Runner: A Reception Study of a Major Film from Post-Revolutionary Iran”). He is currently finalizing a monograph based on his dissertation.