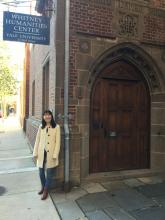 Noriko Morisue joined the combined program in Film and Media Studies and East Asian Languages and Literatures in 2013. She received her B.A. in Cinema from the University of Iowa and M.A. in Film Studies from Emory University. Prior to entering Yale, she spent some time in her native country, Japan, and worked at a film subtitling company. Noriko’s interests include aesthetic and technological film history, Japanese television, as well as alternative modes of film and literary practices in Japan such as avant-garde literature, documentary, and amateur film.