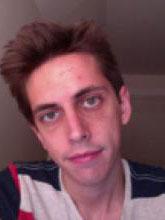 Nicholas Forster is a Lecturer in African American Studies and Film & Media Studies at Yale University, where he received his Ph.D. in African American Studies and Film & Media Studies in 2019. He is currently writing a biography of the black writer-actor-filmmaker Bill Gunn. Although Gunn is most famous for directing Ganja and Hess, Gunn wrote novels, acted in stage plays, and composed lyrics for music and his career broached the bounds of numerous mediums.Forster looks at the scraps of the various lives in communities around Gunn to understand the connections between artists who worked across New York and Hollywood, in and outside of cinema. Examining institutional archives, in-progress works, and ephemera and conducting hundreds of interviews, this manuscript traces the developing networks of creative intimacy and what those relationships might mean for the production and reception of black art in twentieth century.

In spring 2019 he co-edited, with Michele Prettyman, a special section of Black Camera on black independent filmmakers based in New York from the 1960s-1980s. Forster has published in a number of outlets and scholarly journals including liquidblackness, The Village Voice, Journal of Popular Music Studies, Film Quarterly, and Shadow and Act. He is also the founder and host of the podcast The Lower Frequencies, a show which examines the lives, pursuits and interests of academics and artists engaged in the project of Black Studies: http://thelowerfrequenciespodcast.com

Sound technology and race in the 20th century; the relationship between sound and the written word; films of the Black Power Era; the African American Novel in the middle of the 20th century; sound art; hip hop studies; jazz studies; black studies