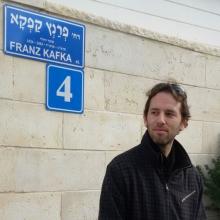 Ido is the co-editor of Mediamorphosis: Kafka and the Moving Image (Wallflower Press/ Columbia UP, 2016) and the author of a number of journal articles and book chapters. His fields of research include German cinema, German media theory, film-philosophy, Franz Kafka, and the discursive impact of technology on film, the latter being the subject of his dissertation project.

Ido has also studied music at the Jazz Department of the Conservatorium van Amsterdam and is an occasional bass guitar player.