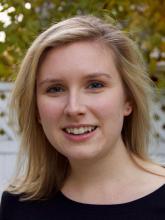 Carolyn Jacobs is a Ph.D. candidate in Film and Media Studies and American Studies. Her dissertation, “Sanitizing Cinema: Contagion and the Regulation of American Motion Pictures, 1900-1925” is about the effect of public health concerns, and the policies they gave rise to, on film spectatorship and media consumption in the United States during the first quarter of the twentieth century. Carolyn’s research interests include the intersection of public health and media, gender and race in silent cinema, nontheatrical film, cinephobia, and documentary media. Before coming to Yale, Carolyn earned an MA in Film Studies from Columbia University and a BA from Connecticut College.