Screening of the documentary One Vote 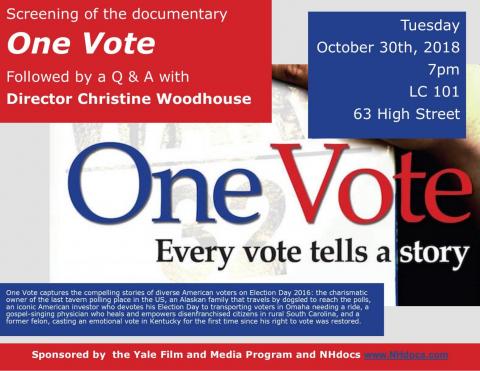 One Vote captures the compelling stories of diverse American voters on Election Day 2016: the charismatic owner of the last tavern polling place in the US, an Alaskan family that travels by dogsled to reach the polls, an icon American investor who devotes his Election Day to transporting voters in Omaha needing a ride, a gospel-singing physician who heals and empowers disenfranchised citizens in rural South Carolina, and a former felon, casting an emotional vote in Kentucky for the first time since his right to vote was restored.

Followed by a Q & A with Director Christine Woodhouse

Sponsored by the Yale Film and Media Program and NHdocs

Screening of the documentary One Vote Poster